Working hand in hand with a stronger larger knife, a neck knife is used on the smaller finer outdoor tasks. Leaving the larger knife for the hard blunt chores, such as splitting wood. This two knife approach is like having a large chef's knife alongside a small paring knife. Allowing you to select the most appropriate tool for the task and all the while increasing efficiency and control. In this review we shall explore the Fällkniven WM1, a great little knife. 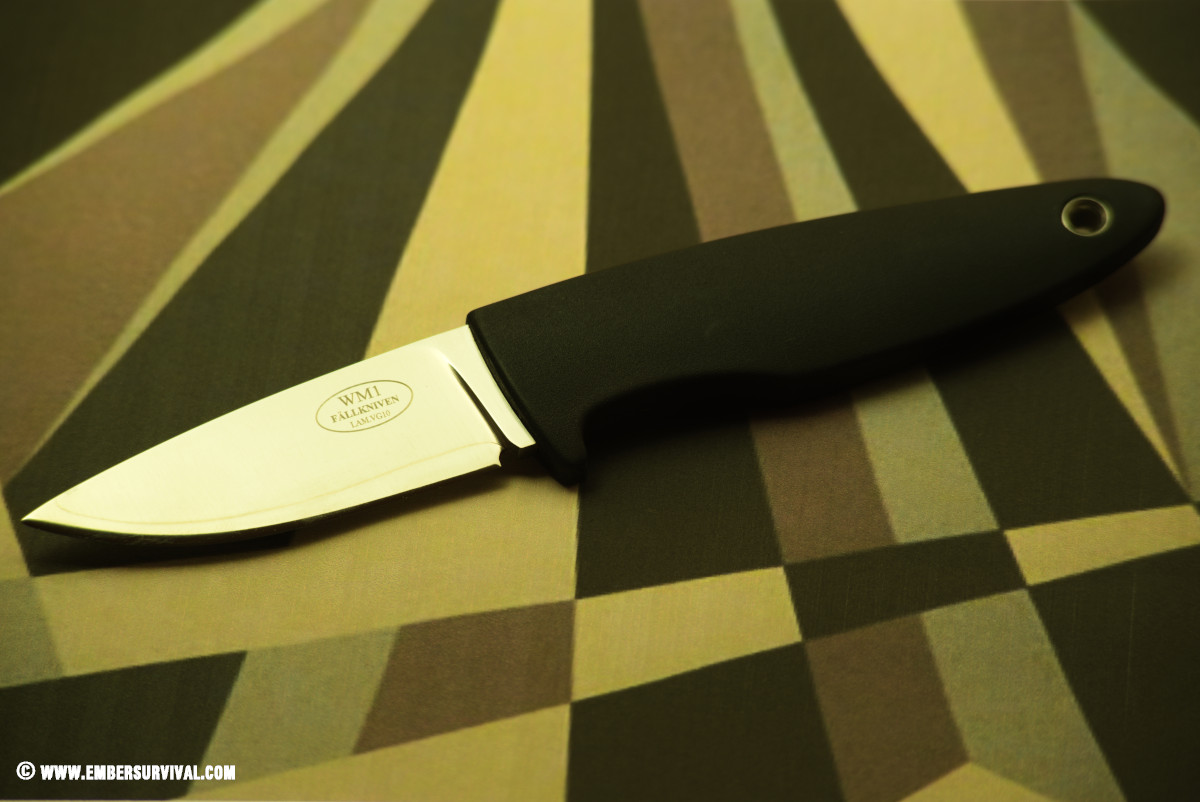 The Fällkniven WM1 was originally designed for women. On purpose it features a slimline handle and an overall smaller profile than found on many other knives, which are predominantly made for people with larger non feminine hands. The WM1 has proved so popular however it is highly sought after by anyone looking for a neck knife or a neat and tidy companion blade.

The usefulness of this knife cannot be overstated. Featuring a blend of impressive features combined in a clever design that all result in a great tool. Be that for field work or for EDC use the WM1 could very well be suitable for you. There are two sheath options to choose from, allowing for even more versatility in the ways you can carry this knife. There is a more traditional leather belt loop dangler and a modern synthetic sheath, we shall explore these in more detail later.

Blade length is 7.1 cm with a thickness of 3.5mm. Total length and weight is 17.5cm and 77g for the knife on its own. The Fällkniven WM1 certainly has a small form factor but does feel sturdy in the hand.

The handle is made of Thermorun, a synthetic material. It is not affected by water, general solvents and DEET among other things. DEET resistance being important where mosquitos may be a problem as normally DEET repellent wrecks havoc on hardened expensive plastics. The Thermorun handle feels like a very hard rubber with a slight texture to it and Fällkniven have made use of this material for 30 years. The ergonomics are very refined and the handle looks and feels incredibly sleek. There are no hot spots or areas that stand out unnaturally. I find the WM1 fits neatly in hand and is suitably grippy. Keeping in mind that the knife is trying to achieve a low profile overall and so for prolonged periods the handle will feel a little underwhelming. The distinct lack of any serious palm swell and the very thin dimensions make this a knife for short quick uses. To clarify the WM1 is designed with smaller hands in mind and so for people who fit into this category may find the WM1 comfortable for extended periods. As the WM1 has small dimensions it doesn’t get in your way when it’s being worn around the neck or on the belt which is a plus for travelling and manoeuvring in and out of vehicles. 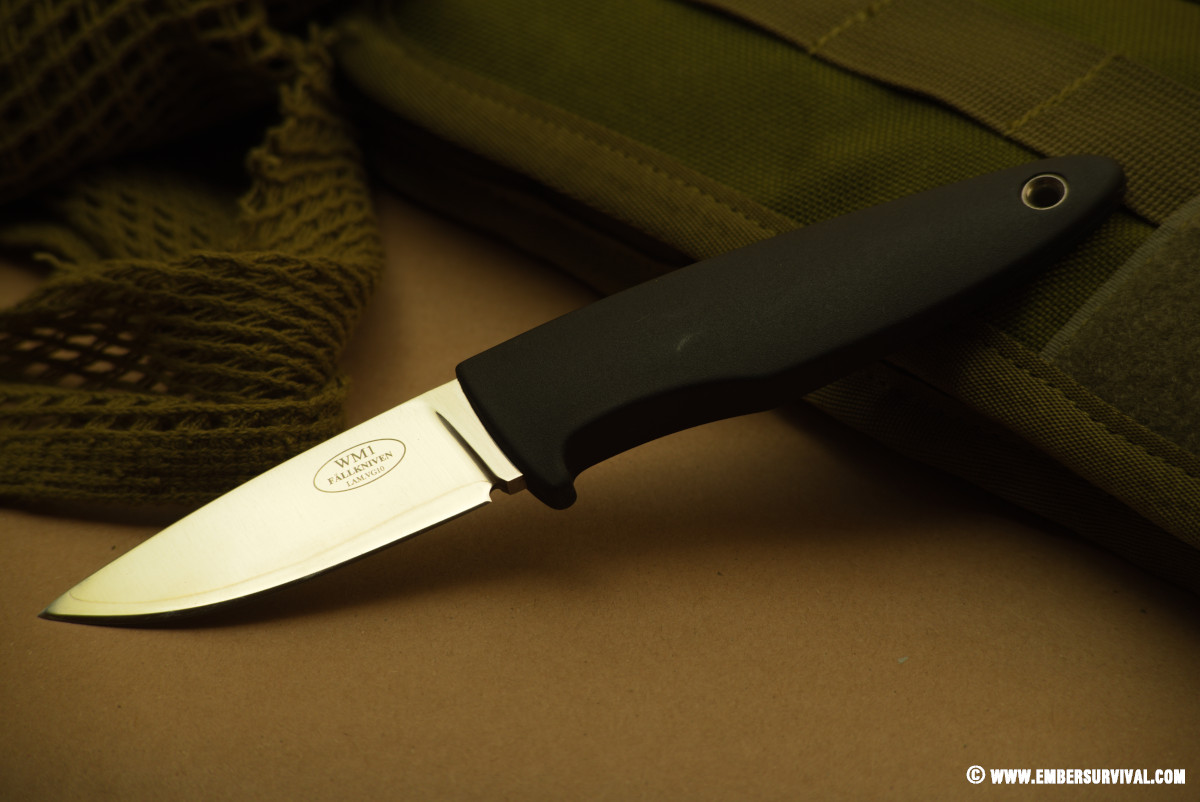 I think the WM1 works best as a neck knife and dealing with lighter tasks so having a smaller handle is perfectly acceptable to me. If you are wearing the WM1 around your neck then you will appreciate this more slender profile.

I went for the VG10 version as I wanted high corrosion resistance and something for easier sharpening. 3G steel is available too, which will be harder and hold an edge a little longer but will be more complicated to sharpen regularly. The rust resistant properties of the VG10 also stood out for me. VG10 is 'wrapped' by 420J2, which has low carbon and high chromium, both allow for great corrosion resistance. Forming the core and blade edge is VG10, which uses a molybdenum cobalt alloy. These two steels used together give the WM1 strength and toughness. Having these steels allow the user to prepare food or use the knife around fresh water without the fear of rust developing in front of their eyes!

The grind is an 'Improved Convex Edge' which boasts improved cutting geometry and strength. This makes it ideal for a wide variety of tasks from chopping vegetables to scraping birch bark for tinder. Convex ground knives feature a seamless transition from spine to blade edge. This uniform structure is very strong and versatile with whatever you throw at it. They are also less prone to chipping or rolling than say a fine Scandi grind. I find one of the most useful tasks to put the WM1 to work on is food preparation. Due to its quality steel and excellent grind it really excels at this varied task which can be anything from chopping, dicing, scraping and peeling. I've also found the Fällkniven WM1 resists tarnishing from acids that certain fruits and vegetables contain. Moreover as the VG10 steel is naturally corrosion resistant you are saved the work of keeping it oiled. This is important as most anti rust treatments you apply cannot be ingested and thus saves you the bother of cleaning any oil or chemicals off the blade before you use the knife for food prep. 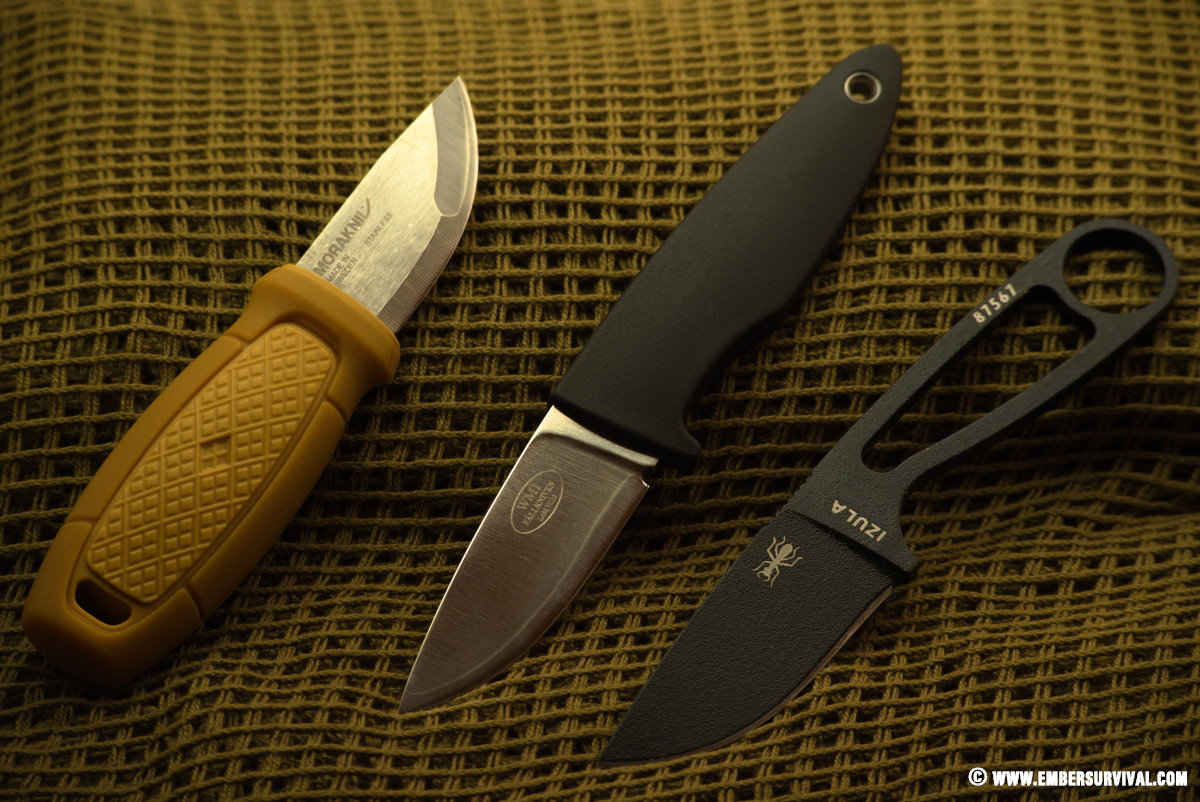 The balance of the blade and handle work very well together and allow for some fine chopping, such as making thin garlic slices. The handle is easy to clean which helps with overall hygiene after you have used it to prepare your meal as well.

A neck knife usually hangs around your neck but can also be worn around your chest in a sideways sling and indeed on the belt too. These locations allow you to access it almost immediately which is one of the reasons these smaller knives are so useful. Nevertheless the easiest place to access it is when you wear it around the neck in the pull down fashion. The WM1 features a fabric press stud closure on the Zytel sheath for this style of carry so you can add extra that security to make sure it does not fall out.

The tang is broad and almost full on the WM1 giving it great balance and strength, enabling you to do some light wood splitting, light carving and firelighting. You can just strike a firesteel with the spine but it doesn't generate a large shower of sparks. The lower carbon 420J2 on the outer lamination cannot scrape a firesteel as effectively as some other steels, such as O1 tool steel. This is the minor price you pay for that corrosion resistance afforded by 420J2. I carry a firesteel scraper on my lanyard and this solves the slight inconvenience. 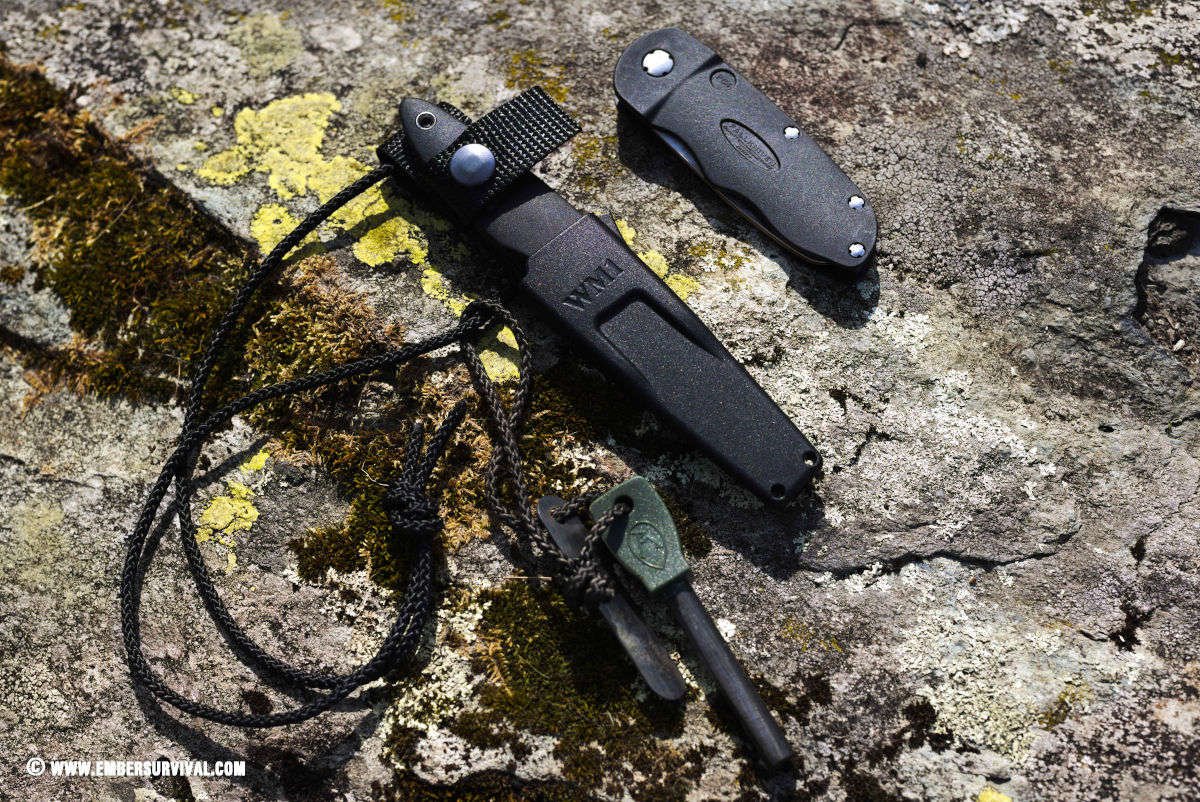 The handle feels good in the hand and is full length and I will gladly accept the narrow handle as the balance and ‘feel’ of the knife is spot on with the dimensions being kept discreet. The tiny finger guard is a nice touch but in the forehand grip with my large hands (size 9-10) it doesn't really help so much. In contrast the chest lever grip the guard works well.

There is a lanyard hole placed right at the far end of the handle, in a very logical position. So when you are using a lanyard the cord passing through the hole doesn't interfere with your grip.

Sharpening the entire length of the blade is easy because Fällkniven have placed a choil on the WM1. This is the small gap between the start of the blade edge and the handle. Without one it is extremely difficult to sharpen a blade as the handle tends to get in the way and prevent your sharpening medium reaching the last bit of the blade edge. It's always the little details that make a knife. 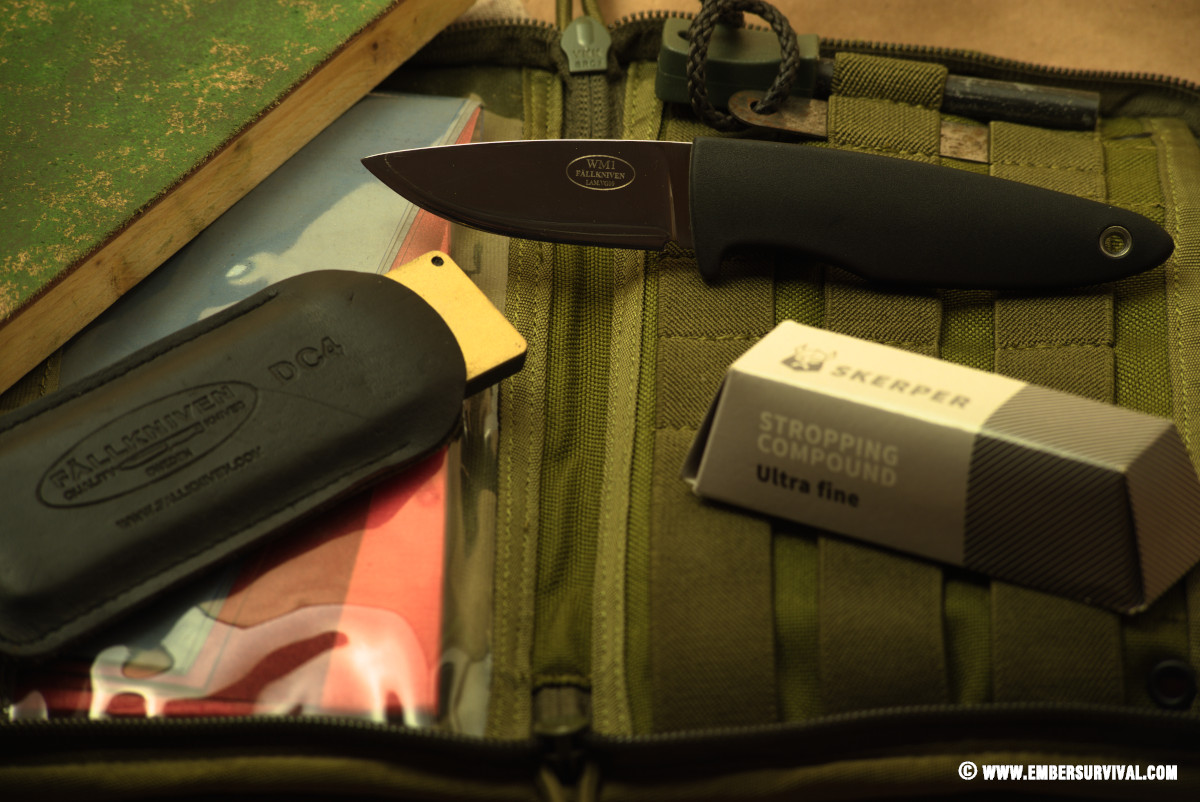 When I sharpen I normally use a combination of wet and dry paper placed on top of thin foam, something like a mouse mat. Carrying a sharpening device like the Fällkniven FS4 or a more traditional Fällkniven DC4 stone helps too. I would always recommend stropping the knife before sharpening it as you may find that’s all it takes to get it back to being razor sharp. The laminated VG10’s edge retention is really impressive and I have got some really good results using wet and dry paper and final stropping using a chromium oxide compound.

You can get the Fällkniven WM1 with a Zytel sheath, which comes with a standard belt loop. A sturdy leather sheath is also available for the WM1 which makes the knife a more traditional belt worn affair. I have already mentioned how much I enjoy using the WM1 for food prep but it has a plethora of other uses too and having two types of sheath further expand on its versatility. 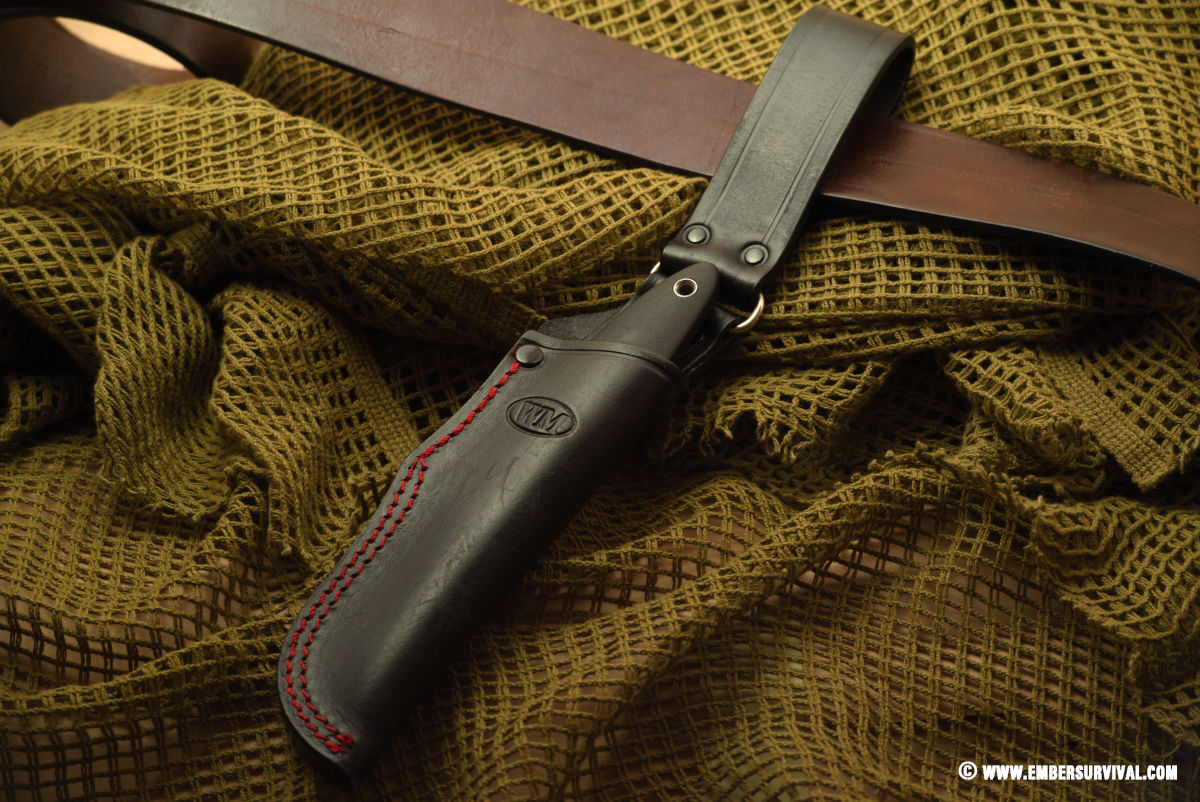 A welt sits within the leather sheath to protect the leather from scratches and cuts when drawing the knife. The generous dangler loop allows the knife to move freely out of the way when you sit or squat down. It is hard to pick a favourite between the two sheaths as they both offer a unique experience.

The Fällkniven WM1 feels like it’s the ultimate neck knife. It combines a discreet footprint with high end steels and a great design. Both of the sheath options are spot on in their own right and each individually bring something to the table. When hiking or fishing the Zytel sheath makes sense or perhaps you are spending more time in the woods then the leather sheath may be more useful to you.
-Sunny